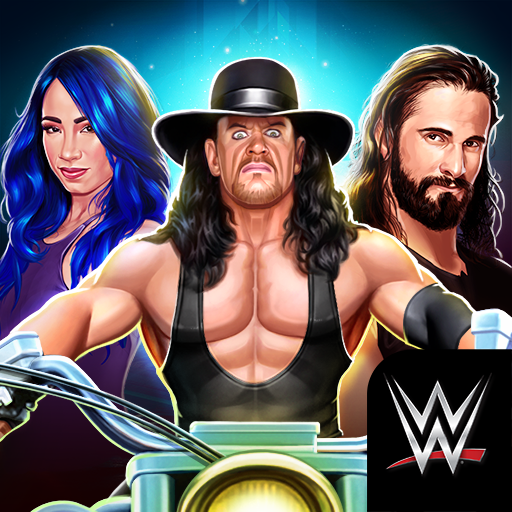 Simple controls to race and fight against your opponents

The controls in WWE Racing Showdown are easy to operate. Just press the left or right to adjust the direction of your motorcycle. When the Nitro Boost button at the left corner is full charged, press it to boost up your speed and catch up with your opponents.

The attack buttons are all on the right corner. You can use the Kick button to defend your Superstar against the incoming signature moves from other racers and kick them off the motorcycle. And tap the signature moves will allow you to attack your opponents and knock them down. Don’t use the attack button before getting close to the opponents otherwise it is useless. Timing of your reaction is the key to win the game.

Unlock and level up more Superstars

After you win racing battles you will get rewards including EXP, coins, training kits and even possible to unlock new Superstars from 1 to 5 stars. You can get to know your Superstars’ profile including the name, hometown, signature move and bio thoroughly. You can try Undertaker’s Tombstone, John Cena’s Attitude Adjustment, Roman Reigns’ Spear, The Rock’s Rock Bottom, Kofi Kingston’s Trouble in Paradise and many more on the aggressive racing battles. Each Superstar is in a unique class among Giant, Acrobat and Technician with different advantages and disadvantages. Pick the right Superstar for different races will help you to win the game at higher chance.

You can level up your Superstars with training cards and upgrade their signature moves with insignia. Once the Superstar is leveled up, the health, attack and defense level will increase accordingly.

Race through various addictive tracks to beat your opponents

You need to complete multiple chapters to unlock the Boss at the final race. Each round requires 10 Energy to start the race. If you run out of the Energy, you can retrieve it by either watching ads to get 10 more or paying 25 cash to get full energy pack.

You can claim rewards after you complete the quests in the weekly Challenges and Rewards to get coins and treasure box for more useful items. Or you can buy the Superstar pack, coins and the other resources in the store to unlock more Superstars and level them up so you can dominate the racing tracks.

I have played WWE Racing Showdown for a few hours and have to say the concept of this game is cool as a combination of racing and combat. However, the game is lagging sometimes, and if you go to upgrade moves page you won’t be able to quit without forced to spend coins to upgrade. Hope the developers can fix these bugs to give WWE Racing Showdown a better gaming experience.